How a Cycle of Violence Works.

So in Iraq and some neighboring countries there is quite a lot of chaos going on. This because these countries are ruled by dictators.

Many people feel angry about this because 99% of the time someone is treated as in-equal, so it causes an uproar and violence to the point where a civil war happens.

After a long fight its over and a new government comes in. Since the other side was treating them like garbage they do the same, and end up not solving anything, so the other side gets angry.

Then there’s an uproar and violence. Soon it gets to the point where there’s another civil war.

And so the cycle starts again… 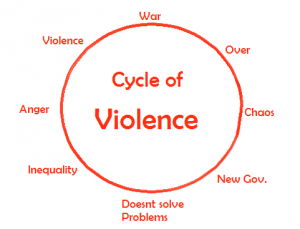 A Thank You Letter To My “Dear Friend”

Thank you, so much my dear friend…

Thank you for this wonderful gift of garlic chewing gum…

A gift so great, it made me puke a little in my mouth…

Clearly you care about my friendship, just as much as I care about your friendship that I shall cherish for as long as I live, along with this garlic gum…

I still drool thinking about it, it’s taste, it’s aftertaste, and all the screaming crying puking and giving up on life I had to endure after it…

Clearly, you are a gem of a friend… 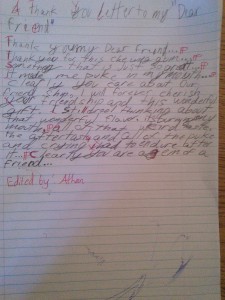 Like if you were using two six sided dice you probably want to play to about 75 just so the game isn’t too short.

You can play with 2-4 players. You could play with more but it’s easier if you just play with a small amount of people.

Like any other game don’t cheat. It takes away from the game and ruins it for everyone else

Iraq in a Nutshell

What the video and copy the notes in the links below.

Notes about the video:

Respond to one of the following writing responses…or…suggest one of your own.

1)Why do you think it’s so hard for people to understand why there is violence in Iraq and Syria?

2) How does a cycle of violence work?

3) How can we help break the circle?

4) Should we be helping in this situation?

5) Why do you think ISIS is doing all this?

A Quickwrite on Ethics 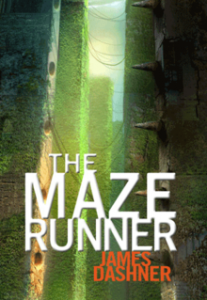 This book is called the maze runner, as you can see in the picture, and title.

The stars in this book are Thomas, Teresa, Minho, and Newt. Thomas is a boy just like the rest, who lost his memory.

Teresea is a girl tha was the first girl in the maze, who apperantly is thomas’s best friend from before, the maze.

Minho is an asian boy who has bin in the maze for 2 years, and also is the keeper of the runners.

Newt is a boy who is second in command, to alby, he is also really tall and use to be a runner.

The story is about a bunch of people, who were put in a maze, and had there memory stolen. They have to work together to escape, they all have different jobs to help out.

So far Thomas came up from the box, met most of the gladers, become friends with some. He also became a runner

got traped out in the maze, because he wanted to save a friend. A girl came up from the box a day after thomas (they are supposed to come a month after each other). The girl was in a coma, she finaly woke up and found thomas. In a corner of the maze, Teresa and thomas can talk telepathicly to each other. now the walls won’t close and the grieviers come at night and kill one person a night. thomas took a needle from the grieviers tale. and stabed himself. so he went threw the changing. I think that they will escape the maze, in the final stand.

Me and Mike BFF😆 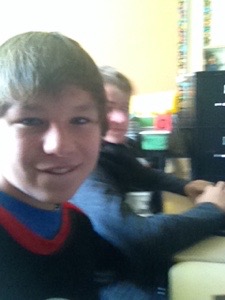 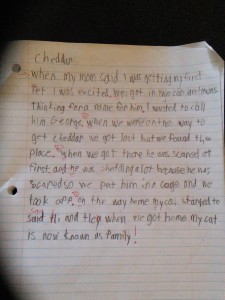 When my mom said I was getting my first Pet I was so excited. We got in the car and I was Thinking for a name for him. I wanted to call him George. When we were on the way to get cheddar we got lost but we found the place. When we got there he was scared at first. He was shedding a lot because he was scared so we put him in a cage and we took off. On the way home My cat started to say hi and hey when we got home my cat is now known as family! 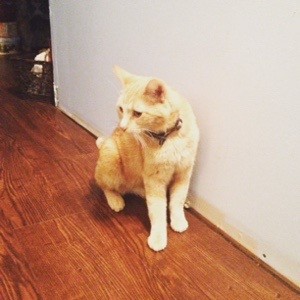 Alexandra’s ballet-crazy mother makes her move to Harlem, New York and signs her up for ballet at The Nutcracker School of Ballet. She thinks she’s a terrible dancer and will do really bad at the big recital because of her stage-fright. She already embarrassed herself from her big, puffy tutu falling off and tripping on her ballet shoes when doing leaps. Alexandra is going to need a lot of help for her rotten stage-fright and for proving herself that she can be a Sugar Plum Ballerina!

The main characters in this book are Alexandra, Epatha who speaks Spanish, Terrell, and Brenda who says everything backwards.

What I think will happen next is that Alexandra will start to like ballet, she will make lots of friends and will get rid of her stage-fright 🙂

If I were in the Hunger Games

If I Were in the Hunger Games 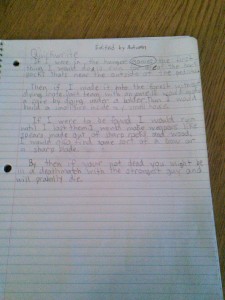 If I were in the Hunger Games the first thing I would do is find one of the back packs that are in a circle around the pedestals.

Then if I made it into the forest without dying (note: don’t team with anyone). I would make a house, well not really a house but anyway. I would dig a tunnel under a bolder and cover the entrance with leaves and a small fire just hot enough to make smoldering ambers. So I could keep the fire for a few days.

If I were to be found I would run until I lost them. If I don’t lose them I would try to team with them then kill them when they weren’t looking. Dark I know.

By this point if you’re not dead you’re in the death match with the strongest, fastest, and smartest player. So good luck.