Today we started our preparations for Festival of the Arts by reading through one of our poems we are performing there.  We read “Backward Bill” by Shel Silverstein and tried some different ways of reading it.

Check out the poem below. 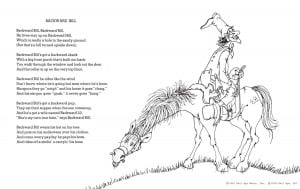 Backward Bill, Backward Bill,
He lives way up on Backward Hill,
Which is really a hole in the sandy ground
(But that’s a hill turned upside down).

Backward Bill’s got a backward shack
With a big front porch that’s built out back.
You walk through the window and look out the door
And the cellar is up on the very top floor.

Backward Bill he rides like the wind
Don’t know where he’s going but sees where he’s been.
His spurs they go “neigh” and his horse it goes “clang,”
And his six-gun goes “gnab,” it never goes “bang.”

Backward Bill’s got a backward pup,
They eat their supper when the sun comes up,
And he’s got a wife named Backward Lil,
“She’s my own true hate,” says Backward Bill.

Backward Bill wears his hat on his toes
And puts on his underwear over his clothes.
And come every payday he pays his boss,
And rides off a-smilin’ a-carryin’ his hoss.

Posted April 6, 2015 by mrewert in category Today in Class, Uncategorized